If you own trees in Colorado, have you noticed that the crowns of any trees have been thinning out? Maybe you’ve seen more woodpeckers than usual, or the bark has been splitting apart.

Regardless, if you are a Colorado tree owner, it’s important to be aware that these things can happen all due to an insect called the emerald ash borer.

And it doesn’t stop there.

Trees are also being invaded by highly destructive Japanese beetles, leaving many people wondering how they can put a stop to these insects for good.

So, what’s the deal with emerald ash borers and Japanese beetles? Why are they so impactful on trees? This blog should help answer many of your questions. 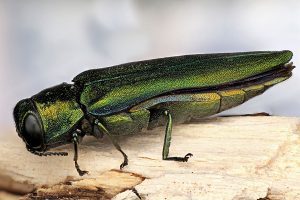 Invasion of the Emerald Ash Borers and Japanese Beetles

Tree owners throughout Colorado have been on the lookout for emerald ash borers and Japanese beetles for many years. Emerald ash borers alone have caused billions of dollars in damages and have directly affected millions of trees in the U.S. and Canada.

Let’s take a closer look at what is going on with the trees in Colorado and why managing emerald ash borers and Japanese beetles is now more important than ever.

What Is Happening to Our Trees?

Emerald ash borers and Japanese beetles don’t have any predators in their current environment. That means that our trees and plants are far from safe if either type of insect is around (unless precautions are taken).

The larvae burrow beneath the bark, eating the tree from within. That affects a tree’s ability to take in nutrients and water, giving the tree only two to four years left to live. Emerald ash borer damage is severe for trees.

Japanese beetles affect us by wreaking havoc on more than 300 plants and trees throughout the U.S. and Canada, according to the Colorado Department of Agriculture. That makes them a huge cause for concern for farmers and anyone who owns trees or plants here in Colorado.

Where Did These Insects Come From?

According to the Colorado Emerald Ash Borer Response Team, emerald ash borers originated in eastern Russia, Japan, northern China, and Korea. The first known U.S. case was in Michigan in 2002, and while we do not know for sure, experts suspect that the insects had been here far before that after having traveled on ash wood pallets and other materials made from ash wood.

Since that time, 25 states and two provinces in Canada have had emerald ash borer sightings or invasions. Concerning Colorado, Boulder is so far the only city we know of that has been impacted.

When it comes to Japanese beetles, they were brought to Colorado at the beginning of the 1990s through a nursery stock that was bought from the Midwest.

Before they were spotted in Colorado, it is assumed that they originated in the eastern U.S. more than a century ago. Over time, Japanese beetles traveled west via shrubs, turfgrass, and more purchased from other parts of the U.S. They also have moved anywhere from one to five miles annually between plants without being transported through nursery stock.

What Do These Insects Do to Trees?

As we mentioned above, emerald ash borers kill trees by cutting off their ability to move around water and nutrients. They can also cause branches to slim up, making them more prone to breaking. You might even notice tunnels beneath the bark created by emerald ash borer larvae.

Japanese beetles are especially prone to damaging tree leaves, making them appear like a skeleton. In some cases, it can even make trees look like they were affected by a fire. Japanese beetles can also have an impact on chlorophyll, making a tree not as strong as it once was.

How to Prevent Tree Damage and Destruction

If you are hoping to keep your ash trees safe from emerald ash borers, you can spray them with chemicals. You can also inspect trees closely to see if they have been infested, and if you notice any signs of infestations, consider getting rid of those trees and putting in new ones.

Another thing you can do to prevent emerald ash borers from infesting your trees is to stop transporting your firewood from place to place. You won’t be able to see the larvae beneath the bark, so you can easily take the insects with you if you haul your ash firewood away from your property.

Ash firewood closely resembles alternative types of wood. That means that if you don’t know if you have ash trees, it’s important to verify that right away, especially if you plan to take your firewood somewhere.

To prevent Japanese beetle damage, limit the amount of water flow to your plants as much as possible. Also, consider getting some chickens, as they eat Japanese beetles. You can also treat your trees.

Ultimately, when it comes down to stopping emerald ash borers and Japanese beetles from affecting your trees, it’s important to talk to a professional pest control company that knows how to safely deter these insects and many others.

We have a proven track record for stopping pest infestations. Our experienced technicians use the best products and equipment on the market to help get rid of the insects taking over your trees.

Don’t want to see your trees fall victim to emerald ash borers or Japanese beetles? Fit Turf is ready to help. Reach out now to learn more about what we can do for you.