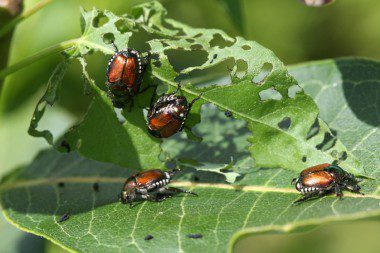 Are you being bombarded with Japanese beetles in the Metro-Denver, CO area? Click on FitTurf.com to learn about how to rid yourself of these pests for good.

How to Get Rid of Japanese Beetles

What’s green, white and brown and is likely devouring your beloved landscaping plants or garden vegetables right about now? If you answered the “Japanese beetle” you would be correct. This nuisance is responsible for the relentless skeletonizing of leaves, flowers and plants in the Denver-Metro area.

The Japanese beetle, which accidentally hitched a ride to the eastern United States from Japan on an iris bulb in the early 1900s, is now present in many eastern and western states. They reach the height of their activity in Colorado in August.

From their larvae stage to their adult emergence in June or July, these beetles’ one-year lifespan is filled with destruction. The female lays its eggs in the fall in well-irrigated lawns, and the larvae feast underground on cool-season grasses throughout the fall, winter and spring.

We’ve compiled a few quick facts that you can use to arm yourself for the inevitable invasion and learn how to get rid of the Japanese beetle.

Unfortunately, it looks like the Japanese beetle invasion is a new reality for Denver-Metro inhabitants. Luckily, it is a short-lived, if not painful, experience that can be minimized and controlled. For more information about these beetles, visit Colorado State Extension’s Fact Sheet No. 5.601.