There are several insect species in Colorado that can cause major problems for trees. Learn more about common tree insects with this guide from pest control professionals at Fit Turf. 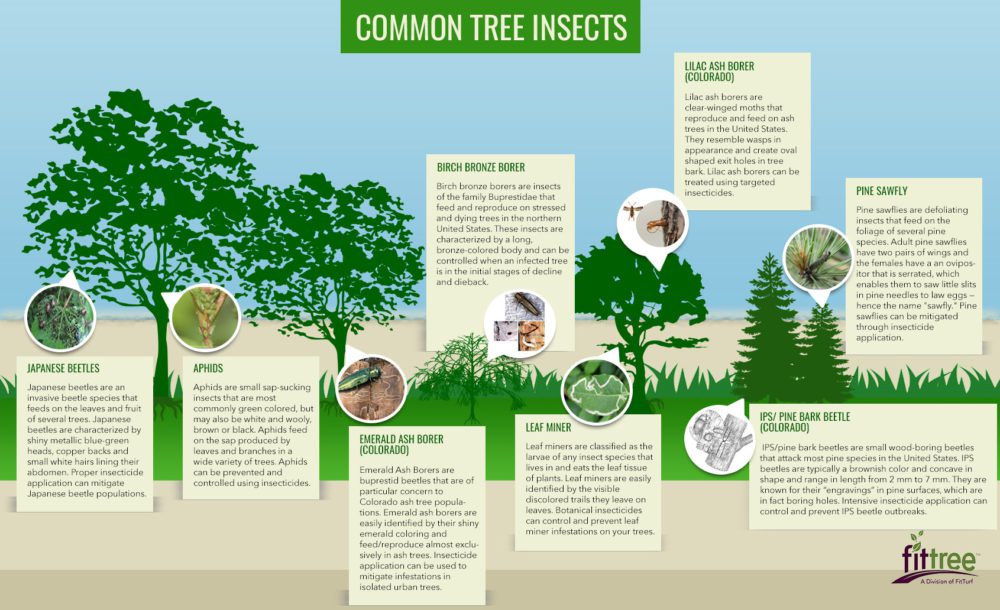 What are Some of the Most Common Tree Bugs?

Aphids: Aphids are small sap-sucking insects that are most commonly green colored, but may also be white and wooly, brown or black. Aphids feed on the sap produced by leaves and branches in a wide variety of trees. Aphids can be prevented and controlled using insecticides.

Birch Bronze Borers: Birch bronze borers are insects of the family Buprestidae that feed and reproduce on stressed and dying trees in the northern United States. These insects are characterized by a long, bronze-colored body and can be controlled when an infected tree is in the initial stages of decline and dieback.

IPS/Pine Bark Beetle: IPS/pine bark beetles are small wood-boring beetles that attack most pine species in the United States. IPS beetles are typically a brownish color and concave in shape and range in length from 2 mm to 7 mm. They are known for their “engravings” in pine surfaces, which are in fact boring holes. Intensive insecticide application can control and prevent IPS beetle outbreaks.

Leaf Miners: Leaf miners are classified as the larvae of any insect species that lives in and eats the leaf tissue of plants. Leaf miners are easily identified by the visible discolored trails they leave on leaves. Botanical insecticides can control and prevent leaf miner infestations on your trees.

Pine Sawflies: Pine sawflies are defoliating insects that feed on the foliage of several pine species. Adult pine sawflies have two pairs of wings and the females have a an ovipositor that is serrated, which enables them to saw little slits in pine needles to law eggs — hence the name “sawfly.” Pine sawflies can be mitigated through insecticide application.

To learn more about these insects, or to treat an infestation on your property, contact our insect control professionals at Fit Turf today!